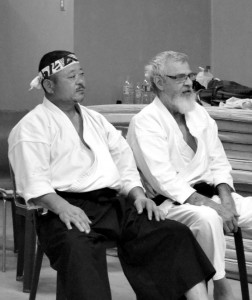 7th dan Shin-shin Aiki-shuren-kai. Tatoian Sensei started Aikido training with Gozo Shioda Sensei in 1965. In 1969 he was transferred to Sagami-Ono where he trained with Sugawara Sensei and began going to Iwama to train with Saito Sensei, under whom he trained from 1970 – 1977. He translated Volumes Three and Four of Saito Sensei’s “Traditional Aikido” texts.

Tatoian Sensei has relocated and opened Aikidojo of Alfonso in the Philippines.