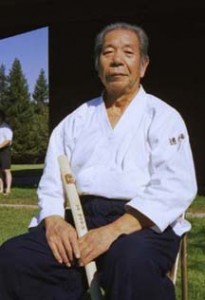 9th dan Shihan Aikikai. Started training 1946 with Morihei Ueshiba in Iwama, he trained there with O’Sensei until O’Sensei’s death in 1969. Saito-Sensei was the author of 10 books on Aikido (Traditional Aikido 5 Vol. series; Takemusu Aikido 4 Vol. series). He was head of the Ibaragi Dojo in Iwama and the guardian of the Aiki Shrine until his death in May, 2002.